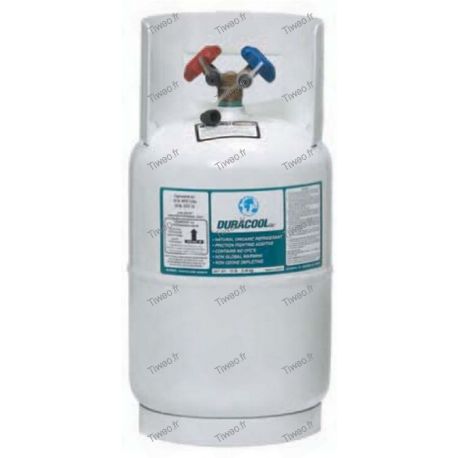 Gas refrigerant Duracool 22A of 9 Kg

Gas refrigerant Duracool 22A of 9Kg, fluid substitution for R22

Notify me when available

Average votes for this product
Average : 0.0 / 5
Based on 0 customers advices.

The Duracool 22a is a gas natural refrigerant without greenhouse effect or effects on the ozone layer, hydrocarbon-based (fluid substitution).

It replaces the R22 now banned for sale. Each cylinder contains 9 Lbs of R22a . The gas refrigerants Duracool work at lower pressures and allow energy savings of up to 40% compared to CFCS, HCFCS and HFCS.

Available in bobbin of 221g here

Attention: It is impossible for us to deliver this product in the Dom-Tom. In effect, the airlines refuse this product for security reasons

Refrigerants DURACOOL® do not require amenities to be purchased, or installed in a circuit void of CFCS, HFCS or HCFCS. Any intervention on a circuit containing more fluorine : CFC, HFC or HCFC requires the speaker to respect the laws in force (Decree of 4 July 2009).

When placing your order, you will receive with your kit a (of the) label (s) affixed to your vehicle to indicate that it is equipped with the gas 12A

All as the R22 and the set of fluid refrigerant,

Ensure you at a charge to have proper ventilation.

Do not smoke while handling the product.

Protect you eyes, face and skin of any spills.

What the law says

Even if our gas 22a is 100% compatible with the R22 and oil existing, the Law says: The mixture of refrigerants is illegal

Recover all the refrigerant existing in an appropriate container and approved, and mark it correctly, because the act prohibits The discharge of refrigerants into the atmosphere

The carAutomotive air conditioningRecharge air conditioning
You must log in to post a review.
Review text is required.
You should wait 30 seconds before posting a new review.
Invalid review text posted.
An error occured. Please try again later.
You already have posted a review for this order.
The secure code is incorrect. Please retry.
Your name is required.
Review posted Awaiting moderator validation.
Be patient during sending....
Post a review and try to win a voucher.

No reviews at this time.

30 other products in the same category:

No related articles on blog